Sydney John Ancill lived in Sandyford Place in Glasgow with his parents, brother and two sisters. His family were in the clothing business and before the First World War his mother ran a ladies outfitters in Sauchiehall Street.

Sydney was born in Glasgow but his family had a diverse background. His mother was born in Edinburgh but had Russian and Dutch connections, and his father’s family was from Poland, at that time part of the Russian Empire. They were members of the Jewish community in Glasgow.

His mother, Matilda Levine or Levein, was born in about 1856 in Edinburgh. In 1871, when she was 15 years old, she lived at 75 Princes’ Street and her occupation was feather dresser. Her mother Rebecca was a corset-maker and her father John was a jeweller. She had an older sister called Henriette who was a dressmaker and a younger sister Louisa who was still at school. A sister-in-law, Fanny Levine, also lived with the family. Fanny had been born in Holland in about 1839 and worked as a French teacher.

By 1881, Matilda and her family had moved to London where her occupation was a dressmaker. The record for her father, John, says that he was born in Russia in 1816. At this time he has no occupation and may be registered blind. Her mother Rebecca also no longer worked. Of her sisters, Henrietta is still a dressmaker and Louisa is now a milliner. Fanny, the French teacher, is also still be living with them.

On 12 January 1887 Matilda married Pinto Ancill, a clothier manager. By this time Matilda’s mother and father were dead. The witnesses at the wedding were Harry Abrams and Joseph Fox, who, 20 years later, would sign the boys’ proposal forms to join the Baths.

By 1891 the couple were living at 3 West Campbell Street. The whole family consisted of:

Also living in the house were a nurse and a servant.

Pinto and Matilda had lost a child who died after just a day or two in August 1889. Little Rema also did not live long; she died before the end of 1891.

There was also a servant living with the family, now at 15 Rose Street in Garnethill.

In 1901 Pinto’s brother Sam moved to 153 Oxford Street in the Gorbals. He was a master tailor and lived there with his wife and three young children, and his his cousin Simon Ancill, 25, also a tailor, and also born in Russia.

On 13 May 1905 Pinto Ancill became a naturalised British subject. The certificate states:

“Subject of Russia, having been born at Warsaw, and is the son of Joseph Ancill and Rachel Lewis, both subjects of Russia, of the age of 48 years, a clothier, is married and has four children, underage residing with him, viz: Sydney John Ancill, aged 12; Reva Edith Ancill, age 9; George Cecil Ancill, aged 7, and Dorothy Gertrude, aged 5.”

In the early 20th century the family was living 27 Sandyford Place and Matilda was involved in running a business nearby. This was Ancill & Levine, importers of blouses and French corsets, based at 349 Sauchiehall Street.

It was first listed in the Post Office Directory of 1898/99, and in several subsequent years, and then described as a Ladies Outfitters from 1908/09 with the last listing appearing in 1910/11. Matilda is described in the 1907 and 1909 parish council electoral roll as a ‘ladies outfitter’.

It’s possible that her partner in the business was connected with the family friend Joseph Fox. He ran the Rodmure School of Dresscutting at 212 Sauchiehall Street, where many Glasgow seamstresses trained. There’s a lovely photo of his daughter Rhoda in a fashionable dress from around 1900 on the Glasgow Story website. Rhoda’s husband was called Levine, so it seems likely that they were partners with the Ancills in the ladies clothes’ shop. From 1910 Joseph Fox’s other daughter – Muriel – also had a well-known dress shop in Sauchiehall Street.

Meanwhile Pinto also ran a tobacconist business at 5 Cambridge Street, from at least 1907 to 1910.

The Ancills at the Arlington

All the children were members of the Arlington Baths at some point.

Sydney John Ancill joined the Arlington Baths as a supernumerary member in June 1907 when he was 13 years old. His Club number was 136 J (J for Junior).

His nine-year-old brother George also joined that day and got the number 137 J.

Their address was 27 Sandyford, Sauchiehall Street. The proposal forms for both boys were signed by Joseph Fox, who had been a witness at their parents’ wedding, and Montague Krakowski.

In 1912 Sydney was included in the UK Medical and Dental Student Registers for the first time when he started his studies at Anderson’s College Medical School, Glasgow, in October. Anderson’s College later became part of the University of Glasgow. He had previously undertaken medical studies at James Noble’s, Glasgow, from November 1910.

The Ancills in the First World War

It’s unclear when Sydney joined the Army; certainly he is listed in the Arlington membership books from 1914 to 1916 (there isn’t a list for 1917) but he was not marked as being ‘on service’ as other members were.

Possibly he was called up or joined after graduation in 1917.

He became a captain in the Royal Army Medical Corp (R.A.M.C.) on the General List – this was a holding unit for specialist officers (usually reservists) who had not yet been assigned to a unit.

George joined the 14th Royal Scots (Lothian Regiment) as a lieutenant. He served in Egypt from July 1917. He was at one time attached to the Royal Flying Corps and later attached to the King’s Regiment. He was awarded the British War Medal and Victory Medal. This information about George Ancill is in the Jewry Book of Honour, published in 1922. A copy is held in the Scottish Jewish Archives Centre.

Sydney died in Baghdad in summer 1920. In 1917 the British had captured Baghdad and southern Iraq from the Ottoman Empire. In 1920, Baghdad became the capital of the Kingdom of Iraq under British Administration, or Mandatory Iraq, created in 1921, following the 1920 Iraqi Revolt against the proposed British Mandate of Mesopotamia, and enacted via the 1922 Anglo-Iraqi Treaty.

On 8th July 1920 the Glasgow Herald reported his death:

Sydney was buried in the Bagdad East Jewish Cemetery and is commemorated on a special memorial erected in Baghdad (North Gate) War Cemetery after the Second World war.

In the 1918 Arlington Baths membership list (which was used for several years after the war ended) his entry is scored out with the word ‘Dead’ written over it. George’s entry (just below) has also been scored out.

The names of both brothers are in the Hillhead High School Book of Honour in the general list of the ex-pupils who served and Sydney is recorded in the list of the fallen.

As well as being on the Baths’s War memorial he is also remembered on the Garnethill Synagogue Roll of Honour.

Matilda had died in February 1918, leaving an estate of £1,875 4 shillings and 11 pence to her husband. She is buried in the Jewish section of the Eastern Necropolis in Glasgow. Sydney’s name was added to his mother’s gravestone.

His father Pinto died in July 1926 and is also buried in the Eastern Necropolis.

Matilda Ancill’s grave in the Eastern Necropolis (Janefield Cemetery) in Glasgow. Sydney’s name has also been added to the gravestone. 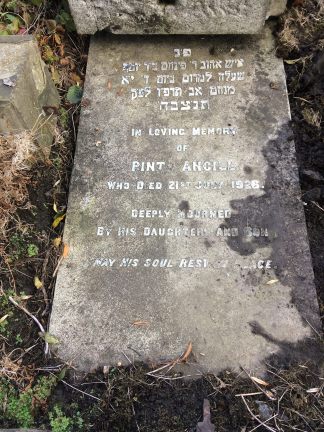 Pinto’s brother Samuel died on 20 Sept 1927 and is buried in the Western Necropolis. His son, Joseph Ancill, became a painter. You can see some of his paintings on the Art UK website, including a portrait of a Lord Provost of Glasgow.

George moved to London in the 1920s and became a manufacturing optician. He died in London in 1958.

Sydney and George’s two sisters Reva (or Ruth) and Dorothy both married and continued to live in Glasgow until their deaths in the late 1970s.

One thought on “Sydney John Ancill, the dentist who died in Baghdad”