Thomas Gentles is one of the faces that members of the Arlington Baths see often when they are in the building. 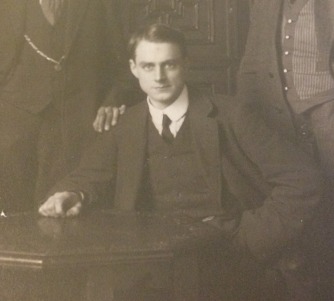 He is also one of the 72 names on the Arlington Baths Club war memorial.

So who was Thomas Gentles?

In 1901 the Gentles family lived at 2 Belmont Street, Hillhead. It was a busy household according to the census records, with four children, Mary’s widowed mother, a spinster sister, and a servant living there. The residents were:

Ten years previously in 1891, the family lived at 128 Elderslie Street, though on the date of the census that year Thomas senior was actually an overnight guest in a hotel in Moulin, Perthshire, and he was described as being a merchant. At that time, Mary’s mother was not living with them, Matthew was yet to be born and the family employed eighteen-year-old Alex Johnstone from Moffat as a servant.

Thomas senior’s father was called William. In the 1871 census he was described as a merchant and paper importer. He and his wife Agnes lived at 45 Rose Street, with their only son Thomas.

In 1881 Thomas senior was not yet married. According to the census that year he was living with his mother Agnes at 375 Sauchiehall Street. Agnes was described as the wife of a paper hanging merchant. But she was also listed as the head of the household though not as a widow, which was unusual.

A bit more digging has revealed that her husband William was in Glasgow Royal Asylum at Gartnavel. Despite these difficult circumstances, the family still appear to be quite prosperous, employing a servant and able to afford the fees for William’s care – those unable to pay for treatment went to Parochial Lunatic Asylums such as Woodilee and Gartloch.

In 1888 a report stated that the Royal Asylum, “accommodates 500 patients, at boards varying from the pauper rate to £400 a year or upwards, according to the accommodation, care and service required.”

You can find out more about the Glasgow Royal Asylum at Gartnavel in these articles:

It is quite possible that William’s illness was caused by his occupation. Many of the popular Victorian wallpapers used a colouring pigment called Scheele’s Green, named after the chemist Carl Scheele who invented it. The bright green colour was perfect for the floral patterns popular at the time, but if the paper became damp, the copper arsenite produced poisonous arsenic vapours that caused sickness, lethargy, confusion and even death. Wallpaper paste and other colour pigments were also highly suspect!

Swimmers at the Arlington Baths

Thomas Gentles junior and his older brother William are listed as supernumerary – ie junior – members of the Baths in 1900. Thomas’ number was 16 and William’s was 27.

Their younger sister Mary Olga was also a member; we’re not sure exactly when she first joined but she was certainly a member in 1905 (number 39), left, and then re-joined much later in 1912, when she was 25 years old (number 286).

William became a senior – adult – member in 1903 and In March 1904 Thomas also moved up to senior membership, now with the number 464.

He was now about 17 years old. You can see from the proposal from that he was working as a bank clerk.

In 1905, William and Thomas signed the proposal form for their little brother Matthew, aged 13 years old and a pupil at Glasgow Academy, to become a junior member.

William even got involved with managing the Baths: he represented the Baths on the joint committee of the Arlington Baths Club and the Glasgow Swimming Company in 1908-1909 and 1910-11.

Thomas was a keen water polo player when he was at the Arlington Baths. You can see his name here in the 1912 Ladies Annual Competition programme where he swam in the Exhibition Team race by the members of the water polo team. 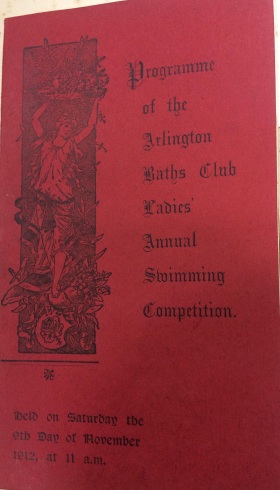 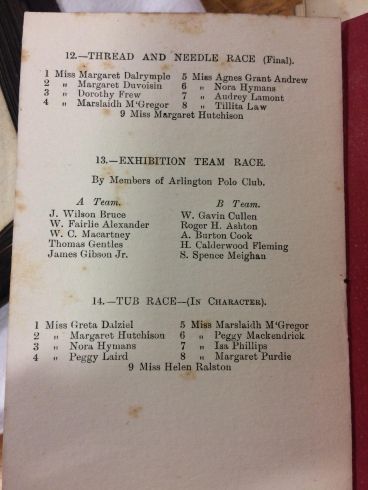 Of the 10 members of the team listed here, four died in the First World War.

He was so prominent in water polo in Scotland that on Friday 31 July 1914 he was the referee for a water polo match at Paisley Baths which was to select participants for the Scottish water polo team for two internationals coming up against Wales on 12 September and England on 19 September. Two other members of the Arlington Baths – E Cameron and W Alexander – took part in the match as contestants. (Reported in the Dundee Evening Telegraph, Thursday 30 July 1914).

The Gentles brothers in the First World War

All three of the Gentles brothers served in the War.

In the 1915 Arlington Baths membership list both Thomas and Matthew are listed as being on ‘Service’. There’s no listing for William so perhaps he had left the Baths by this point.

Thomas was 28 years old when the war broke out in August 1914 and he enlisted with the Cameronians (Scottish Rifles) 5th Battalion on 25 January 1915.

Matthew, aged about 22, who was a shipping clerk in 1914, also joined the Cameronians (Scottish Rifles).

We haven’t yet found any information about William’s war service but we think he was in the same regiment.

Neither Thomas or Matthew were in the army for long. Both brothers were discharged in summer 1916, both being deemed no longer physically fit for service.

In Thomas’ case the Pension Record refers to the Medical Inspection Report from his enlistment which noted that he was 28 years and 11 months, 5’ 10 1/2” tall with a chest measurement of 38” with a range of expansion of 3 1/2” – no doubt thanks to all that swimming! – and excellent vision. His physical development was noted as good.

This is a stark contrast to the Report of the Medical Board on 11 May 1916, when he was declared physically unfit for military service due to pulmonary phthisis. That report records that a year earlier Thomas suffered an attack of bronchitis, “with a cough and bloody expectorations,” and that TB had been found in his sputum. The discharge papers note that the illness was, “not result of military service, but aggravated by same….”  His date of discharge – he was an acting sergeant – was 27 May 1916 and he was awarded a pension of 20/- a week.

His occupation had been recorded as cashier. Part of the assessment considered the potential for alternative employment, or “incapacity in general labour market”, which in Thomas’s case was considered to be “total – future uncertain”.

This award expired on 27 November 1916, which suggests that a further examination may have been anticipated six months later, but there are no further medical records.

Thomas died on 3 January 1917, at the age of 31. He’s commemorated by the  Commonwealth War Graves Commission in the UK Book of Remembrance.

Matthew, a corporal, was discharged on 19 July 1916. This was also because he was physically unfit but we’ve not found any records that explain what had happened to him. He was entitled to receive the British War Medal and Victory Medal but it seems he may not have actually collected them until September 1937.

William was also invalided out of the Service. According to the Glasgow Academy Roll of Honour, William was a Sergeant with the Scottish Rifles and a Machine Gun Instructor. It records that he “died of illness contracted on service, 3rd January 1918”.

This are the entries on the Glasgow Academy Roll of Honour (available on the Internet Archive).

There are two businesses in Glasgow at that time which feature the name Gentles.

When William applied for senior membership of the Baths in 1903 he gave his business address as 3 Scott Street. Much later, in the 1914 electoral roll, he was listed as a frame maker.

Not far from the Glasgow School of Art, this company was well placed to serve the art students and it advertised in the short-lived GSoA magazine, The Palette.

There is also a entry for Gentles & Morison Ltd., paper hangings manufacturers; dealers in brushes and varnishes, with an office and showroom at 336 Sauchiehall Street.

Both these business were still in operation after the War and are listed the 1930 Post Office Directory.

Was the Gentles family involved with both of these businesses? And who was in charge when the brothers were away fighting? Sadly we’re just not sure.

The family after the War

After the War Matthew moved to 12 Young Street in Edinburgh according to the Arlington Baths membership list from 1918. He was still a member of the Baths at that time, though now with a country membership.

But before too long he was back in Glasgow at the family home at 2 Belmont Street. In 1921 the electoral roll records him living there with his mother Mary, sister Mary Olga and aunt Catherine C McCallum.

Another sister – Katherine McCallum Gentles – must have also have been living there but was too young to be recorded on the electoral roll. It seems that she too was a member of the Baths; Katie Gentles was a competitor in the Junior Championship race (Two lengths) in the 1920 Ladies Annual Competition.

In 1928 Matthew was still at Belmont Street.

Mary Gentles died in 1933 in Glasgow. In 1931 she and her daughter Katherine had left the family home at Belmont Street and moved to Cresswell Street.

Mathew died in 1949 in Glasgow though he appeared to have been living in Inverness. His sister Katherine confirmed his death, and she continued to live in Glasgow until at least the mid 1950s.