One of those is Archibald McKellar, who is still remembered today as a fighter pilot, who took part in the Battle of Britain and was the first pilot to shoot down an enemy aircraft over the British Isles.

Archibald Ashmore (“Archie”) McKellar was born in Paisley on 10 April 1912, the son of John and Margaret McKellar, and was educated at Shawlands Academy on the Southside of Glasgow.

As a young man, he joined his father’s general contractor and construction business as a plasterer.

According to his biography on Wikipedia, “McKellar was also a keen fitness enthusiast and, despite his short stature, built up a great physical strength. Though he enjoyed wine and smoked the occasional pipe or cigar he kept in peak physical shape until his death.”

We know he joined the Baths as a senior (adult) member in 1930 when he was 18 years old. It’s probable that he’d also been a member as a boy. At this point he was living at 33 Airth Drive in Mosspark on the Southside of Glasgow.

In January 1936 McKellar was awarded a Royal Aero Club Aviators’ Certificate – his flying license – at the Scottish Flying Club in Renfrew.

His address – Navrig, Brora Drive, Bearsden – was his parents’ home.

According the Traces of War website, McKellar joined the Royal Air Force on 8 November, 1936 as a Pilot Officer (commissioned), and became a Flying Officer on 8 May, 1938.

He completed his training in 1938 and was assigned to No. 602 (City of Glasgow) Squadron RAF, an Auxiliary Unit. In 1939 he converted to the Supermarine Spitfire fighter. When war broke out in September 1939, the Spitfires of 602 Squadron were posted to RAF Drem in East Lothian.

In the 1939 Baths membership list his name was marked with an A for Absent and then scored out.

In October 1939, McKellar was involved in the first shooting down of a German aircraft over the British Isles.

The following year he was promoted to flight lieutenant and on 11 September 1940 he took over command of No 605 Hurricane Squadron.

McKellar became one of The Few – the airmen who fought in the Battle of Britain. They were celebrated in the speech by Prime Minister Winston Churchill which included the famous line: “Never in the field of human conflict was so much owed by so many to so few.”

He was one of the airmen portrayed by artist Cuthbert Orde , a former First World War pilot, for his book Pilots of Fighter Command: Sixty Four Portraits.

This officer has led his squadron with outstanding courage and determination. He has destroyed 20 enemy aircraft, and his magnificent fighting spirit has proved an excellent inspiration to his fellow pilots.”
Citation for Distinguished Service Order, London Gazette, 26 November 1940

He was also Mentioned in Dispatches in December 1940.

In total he had shot down a total of 21 enemy aircraft, including five Messerschmitt Bf 109 fighters in one day in October 1940, meaning he became one of the airmen designated an Ace In A Day.

He was 28 years old when he died. He is buried in the Commonwealth War Graves section at Eastwood New Cemetery in Thornliebank, Glasgow. 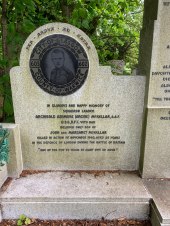 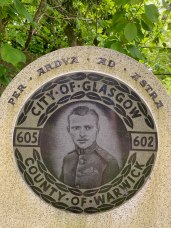 On 16 January 1941 Sir Archibald Sinclair, Secretary of State for Air, visited Glasgow to deliver the eulogy:

“Not long ago I visited a fighter squadron which was taking part during the dark days in the battle of this island. That squadron lost its leader in an air fight—and they felt the loss. He had been wounded in combat and had been withdrawn from service. I found in his place, taking to the air with daring resolve, proving himself a leader amongst leaders, a young Scot. His name was Archie McKellar. He had come from the City of Glasgow Squadron to lift up this squadron in its dark hour and to carry it on to fresh victories and achievement by his spirit. It was quite apparent to me that he had the whole squadron with him. He was regarded with the greatest admiration and affection by his officers. I will never forget the impression he made upon me when I saw him.”

You can see lots more information about Archie McKellar and his war service online and there’s an exhibition room about him in Kelvingrove Museum in Glasgow.