When was did the Arlington Baths Club opened? How was it set up?  And who was behind it? Here’s what we know about the origins of the Baths.

In Victorian Glasgow on 5th July 1870 a group of well-off gentlemen met to form the Glasgow Swimming Bath Co Ltd.

This was the result of several earlier meetings and then, just under a week later, this resulted in the formal incorporation of the Glasgow Swimming Bath Co. Ltd on 11 July 1870. The purpose of the company was to construct a swimming baths building in Arlington Street, Glasgow, and to set up a swimming club to use the facilities. 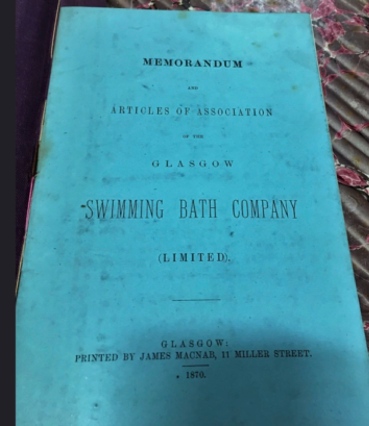 Cover of the Memorandum and Articles of Association of the Glasgow Swimming Bath Company Ltd. Glasgow City Archives TD965/1 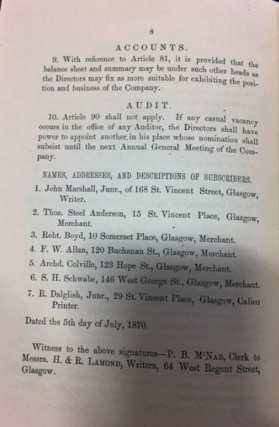 Inside page of Memorandum and Articles of Association of the Glasgow Swimming Bath Company Ltd with subscribers names and addresses. Glasgow City Archives TD965/1

The Memorandum and Articles of Association of the Glasgow Swimming Bath Company Ltd lists the names and addresses of the subscribers at that point. They were:

*At this time the occupation ‘Writer’ was a role in the legal profession.

On 20 September 1870, the Evening Citizen newspaper, reported that it had observed “a new building of peculiar construction on course of erection at the end to Arlington-street”.

Inquiries revealed that it was a swimming bath, which they welcomed as, “a want long felt in our city was at length about to be supplied. The inhabitants of the West-end of Glasgow have hitherto had but few courses open to them if they wished to indulge in swimming or to acquire a knowledge of that exhilarating and useful art. There were only the distant baths near the Green and the still more distant Firth of Clyde – Helensburgh being the nearest point at which the water did not taste a good deal worse than salt.”

It explained that “The baths is being built by the Glasgow Bath Company (Limited) This company ranks among its members many of our most distinguished citizens together with a larger number of younger men, who have formed themselves into a club for the purpose of availing themselves of that admirable building. ”

And on the matter of who could join, it revealed that members had to be approved by the committee but that women and children might also be able to join.

“The election of candidates is in the hands of committee of fifteen, chosen annually by the members; and by way of extending the usefulness of the club it has been arranged that the children of members are to be admitted to the used of the swimming bath at a merely nominal charge. It is also, we understand, contemplated to set apart the bath on Mondays from ten to four o’clock, exclusively for the use of ladies, when a properly qualified female will attend for the purpose of giving instructions in swimming.”

The newspaper thought the annual subscription of 40 shillings was high but that acknowledged that the rates would reduce in later years, especially for the people who joined in the early stages.

Many of the Swimming Bath Company shareholders were also members of the Arlington Swimming Club.  This financial arrangement was not unusual at this time and was used to fund the construction of buildings such as churches.

The Arlington Swimming Club Committee of Management was listed in this advert for members in The Star,  19 October 1870.

Construction and opening of the building

A report to the shareholders of the Swimming Bath Company in May 1871 stated that:

“The Directors purchased ground in Arlington Street, and having taken in estimates, they accepted tenders for the construction of the Bath amounting to £2,258 2s. The progress of the work was delayed for some time by the severe frost of last winter, but the Architect now expects that the Building will be entirely finished not later than the 1st of August next.”

By August 1871 the building was indeed ready. Here’s what it looked like:

“The bath measures 70ft by 35ft ; slopes from south to north, its depth at the northern side being 7ft 3in, and at southern between 2ft and 3ft ; and the height from the water-level to the wall head of building is 27ft 6in. The sides and floor of the bath are lined with white glazed bricks, jointed with red cement, and along the upper edge of the sides is a border of two lines of black. Along the north and south walls are ranged the dressing-boxes, and to within a few Inches of the water are suspended from the roof trapezes, swings, iron rings, ladders and various other gymnastic “means and appliances.” Besides the swimming there are Turkish and hot baths, and a smoking room 24ft by 18ft 6in. Little more need be said than that the building is alike most handsome and comfortable ; that the style of architecture is Italian slightly flavoured with Greek…”

The article also reported that “The cost of the building will be about £2,500; the shares are £5 each; the annual subscription for those who are shareholders before opening-day is 30s, and for others 40s with 20s of entry-money.”

The building, designed by John Burnet, opened on 1st August 1871.

Over the following 25 years the two organisations continued to exist alongside each other.

The Swimming Bath Company was used as a means of raising revenue for maintenance or extensions to the building as requested by the Arlington Swimming Club. The Club would also buy back shares in the company whose share value was depreciating over time. For example in 1875, the Club held 123 shares in the Company.

In May 1895 it was decided that a joint committee of both organisations should take over the management of the building. It was recorded in the Glasgow Swimming Bath Company (Limited) Minute Book that “the best arrangement would be for the Company to take over the whole Assets and Liabilities of the Club and to work the Baths for the future as one concern in the same way as the other Baths of the city are worked, the members of the Club having representation on the Board of Directors to look after their interests.”

Then, in October 1923, the Arlington Baths Club (as it was now called) approached the Company to finally buy back all the remaining shares. A memo to shareholders explained that the Directors thought this offer should be accepted.

“The Directors have received an offer from the Committee of the Arlington Baths Club, their tenants, to purchase the Bath premises and the Company’s whole assets, for the sum of £2,700, which sum , after meeting the bond for £2, 200, and paying the costs of the liquidation would be sufficient to pay 5/- per share to the Shareholders; and the Directors, having considered all the circumstances, recommend the acceptance of this offer…

The Company was formed in 1870 (with a capital ultimately amounting to £7,000, divided into 1,400 shares of £5 each, fully paid) to build a Private Swimming Bath for Glasgow, and form a Club which would rent the Baths at a sum sufficient to meet all the expenses of the Company including interest, rates, taxes, and repairs, and pay 5% on the capital outlay.”

So, finally, on 22 October 1924, the Glasgow Swimming Bath Company was formally wound up, leaving the Arlington Swimming Club as the full owners of the building, as it still remains to this day.

Researcher: Will Jess and Lucy Janes

14 thoughts on “The founding of the Arlington Baths”